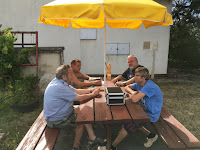 I participated in the contest with son Jakub from OK5T contest QTH together with the rest of the team. In summary it was nice weekend with lot of very enjoying QSOs on 2m and mainly on 70cm... even although this QTH is only 220m ASL.

Any kind of QSO on 70cm is challenge from this QTH, hi...

The only 100W transceiver in small pistols category using the 1x LFA (G0KSC) antenna this year at the 220m ASL is not predestined to win on 2m. On the other hand I have to say it worked well thanks to good condx and mainly thanks to an excellent antenna! At the beginning IQ5NN (774km) station came with nice sigs so Ludek, OK1VSL was pleased to start first hour of the contest with nice DX.

Everything worked well all the time including the second operating position for 70cm band where Jakub, OK1-36357 aka OK1RCG spent maximum time and his effort in order to try what is possible with installed setup and low profile, low ASL QTH and tried to get as best result as possible. 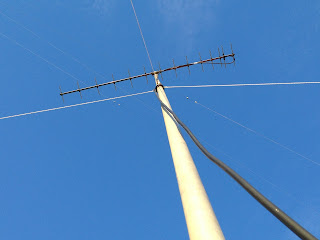 The current club's 70cm setup is using 20W from FT-857D (many thanks to Mira, OK1JMJ) into small 14el. single yagi, so it is hard job to get some reasonable results over there... 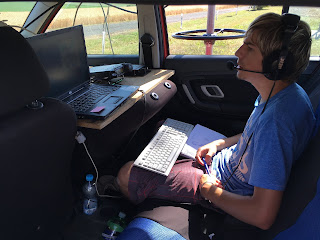 The only interesting thing was at the beginning of the contest that most of the sigs had very fast QSB and lot of calling stations disappeared during first shot.
The most important time for me was Sat/Sun night when I planned some DX-ing on CW. It was a bit dissapointing for me but even although I expected a bit more from this part time I worked stations over 500km away on 2m and some stations over 400km on 70cm band. 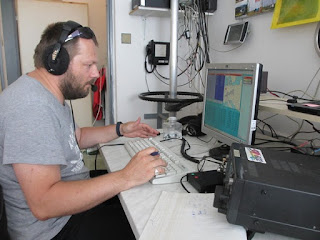 The assembling the 70cm station in the car was funny and Ludek, OK1VSL had to make light gymnastic figures, hi... 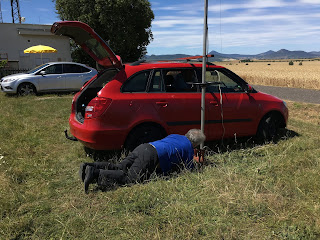 My son Jakub enjoyed his "Scouts" VHF Field Day part on 2m as OK1KDG where he made a bit lower result refer to last year probably also thanks to single LFA only compare to last year. 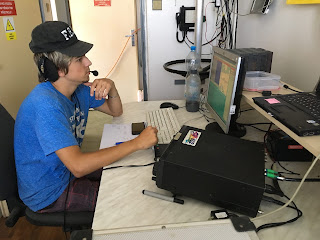 We enjoyed the sunshine WX with hot temp over 30C deg and sausage BB in the Sat evenning so it was enjoyable weekend for all the team I hope. 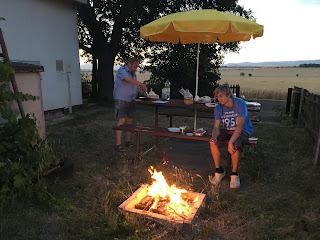 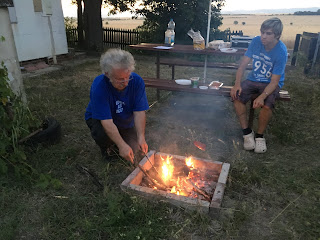 Finally we worked 93 QSOs with over 18k points on 70cm in VHF/UHF Field Day this year using only 20W out into 14el. single Yagi as OK5T mainly thanks to Jakub! Well it is the best club's result with this setup from our 220m ASL QTH... 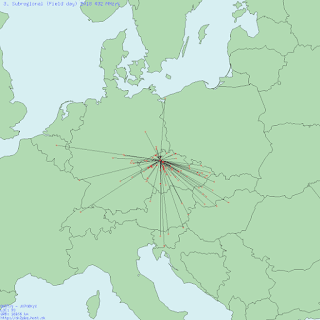 Also some paddles and keyers were tested Sun morning by all club's mates so we enjoyed the CW not only on the air, hi. 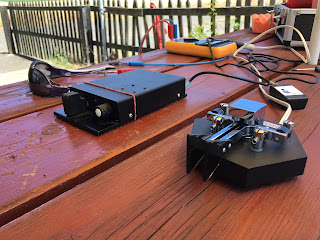 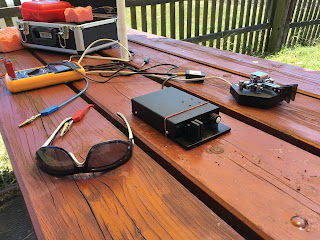 Even executive director and club's cheef Ludek, OK1VSL "itself" played with my Hex key from Bencher a bit under precise supervision by top-class telegraphist Lada, OK1DGU (on the right)... 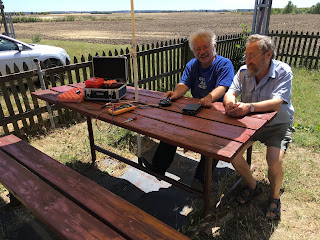 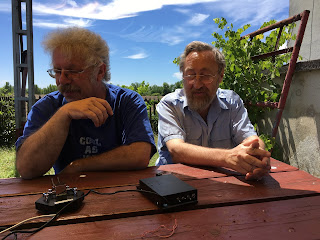 Many thanks for all nice QSOs during the enjoyable weekend and hope to hear you again on the air soon.

PigKnob - another external knob for your Elecraft rigs 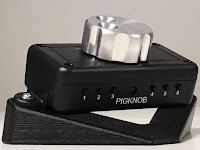 my PigKnob is ready to be used again after opt. encoder replacement.
Some people are asking for difference in between the PigKnob and KPOD...

The PigKnob is a remote tuning knob for amateur radios that use a plain-text based control protocol (Elecraft, Kenwood, new Yaesu). It has 8 tactile switches and an optical encoder with a solid aluminum machined knob. All functions on the PigKnob from the switches to the encoder clockwise/counter-clockwise actions are user customizable. 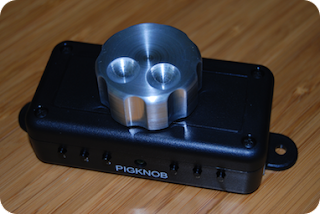 The PigKnob consists of two circuit boards, one in an enclosure and one bare. They are connected with 6 conductor ribbon cable. This reduces cable clutter on your desk, keeping the serial cables and power out of sight.

The PigKnob by Pignology, LLC sends it's commands to the K3 via the serial port. When you are operating remotely, that port is connected to the RemoteRig interface.

The KPOD by Elecraft connects to a jack on the bottom right edge of the front panel that Elecraft normally uses for final testing of factory-assembled radios and doesn't interfere with the serial port. 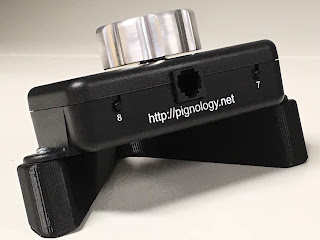 The PigKnob stores the desired commands in its memory and sends the commands when asked to. The KPOD does not store any commands. The desired strings of commands are stored in the radio using the K3 Utility. All the KPOD does is activate one of those 16 macros when you tap or hold one of the 8 buttons. 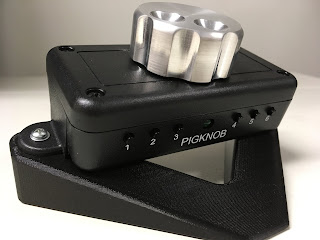 In the case of a remote station, the macros are stored in the remote host radio, not your local control radio. If the system is yours and you're the only operator this works fine. If the station has multiple users, then there has to be some agreement on what macros will be stored.

The KPOD is somewhat expensive. If you have own antennas at home then you will be happy with that PigKnob. 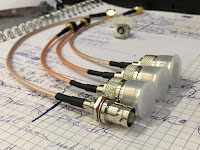 The measuring SMA/N and SMA/UHF + SMA/BNC jumpers arrived. I will measure them on VNA in lab before any assessment or judgment. I ordered several versions for lab test with N, UHF, BNC using the RG316 PTFE coaxial cable. As I said several times I hate Chinese craps but these looks well for the first view...

I will make the lab report and short review of the jumpers when lab time will be available. 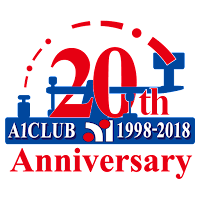 A1 CLUB has been established in October 1998 by 11 charter members who gathered under the same slogan "Let's gather CW lovers, enjoy CW and attract people to CW"

After 20 years, A1 CLUB has grown with more than 3000 members from 50 countries worldwide as a free and open community which anyone who has interest in CW can join.

A1 CLUB has been and will continue to be a supporter of "CW" as the only one digital mode which can be code and decode by human.CW4EVER! 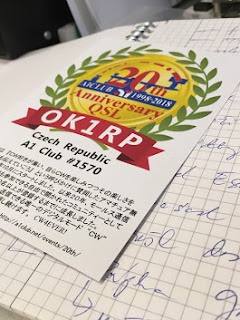 My new 20 years A1 Club Anniversary QSL cards are ready to go... 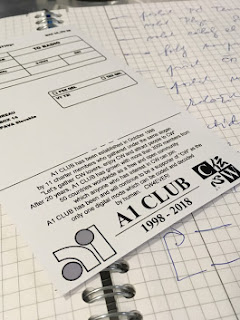 Email ThisBlogThis!Share to TwitterShare to FacebookShare to Pinterest
Labels: Operation

If you are not so satisfied with the K144XV transverter module installed in your Elecraft K3 transceiver then you should read it...

Thanks to Steve, DH1DM you can make "must have" modification which could solve your issues or it can help you at least...

After re-tuning has been completed these modifications result in an increased TX stability and no oscillations can be observed anymore at any power/frequency. 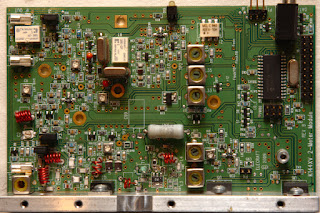 Component alignment has also been found less critical after modification. Output power has been measured at 9.5W.

Email ThisBlogThis!Share to TwitterShare to FacebookShare to Pinterest
Labels: Technical

Sea of Peace Award 2018 (SOP) started!
If you want to get beautiful pennon or following your last year achievement you would like to continue to get sticker then you should turn on your radio and pay attention to the stations from the required countries during the July 2018...

This certificate in form of a silk pennon will be awarded for QSOs with the Baltic neighbouring states and regions in July. Annual stickers can be acquired for repeated fulfilment of the rules during the subsequent years. 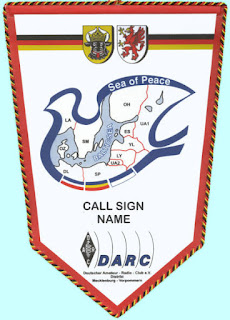 Beyond coming SOP-owners will receive special recognitions after 5-and 10-times achievements of the pennon and stickers. 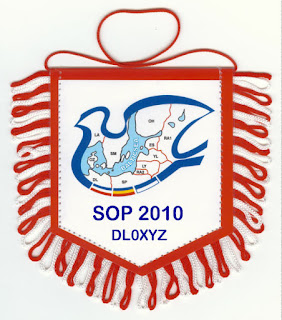 This popular certificate was awarded by the amateur radio organisation of the former GDR in 1958. And has been continuing by the DARC district Mecklenburg-West Pomerania since 1991.

Effective from 1st Jan 2017 please paper QSL via OM-bureau only.